I am really really lucky. Nasty politicians have been denying me my democratic rights. But now thanks to ITV’s Tonight programme I’ve had my chance to vote on Europe. Hurrah!

Trevor McDonald, in his wisdom, has chosen parts of Luton to take part in a ‘referendum’ on the Lisbon Treaty. I was even sent a “ballot paper”, an image of which you can see below. 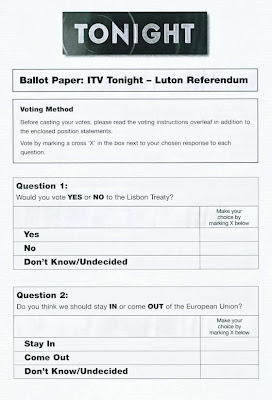 So what was this “referendum campaign” like then. Well, I was sent a few, really very badly done, leaflets. The ones from the Democracy Movement for the “no vote” where full of the usual distortions and scare stories. The single leaflet from the European Movement was truly dreadful. Dull isn’t the word. Oh and one afternoon an open top bus drove down my road complete with my eurosceptic Labour MP and a camera crew. And, er, that was it.

As a local Councillor and actively involved in the politics of the town I was barely aware it was happening. So I imagine this “referendum” left the average Luton “voter” blissfully unaware.

This was not a referendum in any meaningful sense and, call me jaded and cynical if you like, but I find something slightly objectionable in a media organisation deciding without any consultation with anyone that I get to take part in it. It is really just an opinion poll. An opinion poll that is conducted under a dishonest label and without adhering to the standards that a proper opinion poll should follow.

I did not return my “ballot paper” and have now missed the 9 October deadline.

I note that this largely futile exercise has been taking place while the global economy has been going into melt down making European cooperation even more vital. Ironically, the economic crisis is the reason why the programme about all this, originally scheduled for Monday 13, has been postponed to October 20.