One of the things I have managed to do in the last few weeks is to sit down and take a proper look at the recently published Local Government White Paper and come to a considered judgment on it.

An awful lot of the proposals in the White Paper are essentially about making local government better able to fufill the Government’s policy objectives. New Labour are struggling with “delivery”. They know that they rely on local government to provide a lot of that “delivery” but have found that many of the ways they have been “encouraging” councils to do this task haven’t been working as well as they would like. Slowly they are learning and so the White Paper contains some sensible reforms improving the way local government works towards delivering the governments agenda.

You will have of course spotted the illiberal flaw in this, that this is not about better ways for local councils to deliver their own agenda. The White Paper has almost nothing to say about the democratic renewal of local government and with it coming out, ridiculously, prior to the Lyons Report has nothing to say on local government finance. Hardly the “radical” document they claim it to be.

Indeed parts of it betray a basic lack of knowledge about how local government works. To illustrate I reproduce the following diagram from the document (which I acknowledge is Crown Copyright) which illustrates the process of their proposed “Community Calls for Action”. 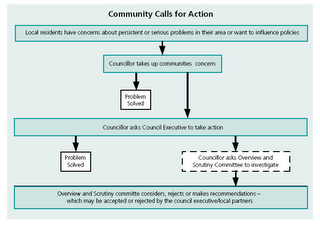 However, worse than this are the proposals for executive arrangements within councils. The paper proposes that councils will be forced to choose one of three leadership models; an elected executive mayor, a separately elected leader and executive, and a leader elected from the council for four years with all executive powers. These changes, including a move to an elected mayor, would no longer require a referendum, just a decision by the council. Aside from the practical difficulties with each of these models, the whole direction councils are being forced to follow just emphasises how deeply the government has developed its obsession with the idea of the strong leader.